What Is Target Archery

What is Target Archery.

Currently 142 nations are represented by WA archery governing bodies. The largest of these are the FFTA (French archery federation) with approximately 60,000 members, FITARCO (Italian federation), DSB (German federation), AJAF (All-Japan archery federation), and the GNAS (Grand National Archery Society) of Great Britain, with approximately 30 000 members which has now re-branded itself as Archery GB. In the United States the WA affiliated governing body is USA Archery (National Archery Association of the United States), which dates to the 1870s, making it the third oldest archery governing body after GNAS and FITARCO, which dates to the 1860s.

Target archery is the most popular form of archery, in which members shoot at stationary circular targets at varying distances. All types of bow – longbow, barebow, recurve and compound – can be used. In Great Britain, Imperialrounds, measured in yards, are still used for a lot of tournaments and these have slightly different rules to WA (metric) rounds, which are used internationally. Archers are divided into seniors and juniors, with juniors being those under the age of 18.

Archery competitions may be held indoors or outdoors. Indoor rounds are normally shot at one distance, whereas outdoor competitions normally consist of several distances. For lists of tournament rounds, see section entitled Tournament Rounds. Since archery involves the use of potentially lethal equipment, much attention is paid to order and safety. Whistle commands are used to signal the different phases of shooting, or an ‘end’. Two whistle blasts means archers can approach the shooting line. One whistle blast means archers can begin shooting. The archers are not allowed to collect their arrows whilst other archers are shooting. The signal to collect your arrows is three whistles from the field captain. These rules apply to all forms of target archery. Other rules, or points of etiquette, include:

For a 1440 round, known until 2014 as ‘FITA Round’, outdoor distances range from 30m to 90m for senior Gentlemen archers, and 30m to 70m for Ladies. The juniors have shorter targets to shoot at. In Olympic archery, 70m is the standard range. Indoor distances are either 18 or 25m.

Competition is divided into ends. An archer shoots either 3 or 6 arrows per end, depending on the type of round. After each end, the competitors walk to the target to score and retrieve their arrows. An indoor competition is usually 20 ends of 3 arrows.

Archers have a set time limit in which to shoot their arrows. For indoor competition, under World Archery Federation rules this is 2 minutes for 3 arrows. Signaling devices such as lights and flags inform the archers when time is up. For a 1440 outdoor round the archer has 4 minutes to shoot 6 arrows at the two longer distances, and 2 minutes to shoot 3 arrows at the remaining two shorter distances.

Competition is divided into ends. An archer shoots either 3 arrows per end (indoors) or 6 arrows per end (outdoors). After each end, the competitors walk to the target to score and retrieve their arrows. An indoor Worcester round shoots in ends of 5 arrows.

At all record status tournaments, archers must adhere to the AGB dress code. The recognized dress is plain dark green and/or white, or ‘club colours’. Club colours are unique to a club, and registered on the AGB shooting colour register. However, any colour garments may be worn with the exception of blue denim, olive drab and camouflage pattern.

In a tournament, awards are normally split into categories according to bowstyle, sex and, for juniors, age. All registered AGB archers also have an indoor and an outdoor classification, and classification awards may also be presented – this allows archers to only shoot against those of the same ability.

The Grand National Archery Society runs two systems of classification: the main Classifications (for indoor and outdoor shooting) and Handicaps. To do this, they produce tables of scores for all recognised rounds and an archer’s classification and handicap can be worked out from their scores, normally by a club’s Record Officer.

For indoor rounds, an archer has a classification represented by a letter from A to H, with A being the best and H the worst. This applies for both seniors and juniors. 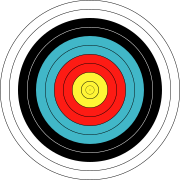 Standard WA targets are marked with 10 evenly spaced concentric rings, which generally have score values from 1 through 10 assigned to them, except in outdoor Imperial rounds under AGB rules, where they have score values 1, 3, 5, 7 and 9. In addition, there is an inner 10 ring, sometimes called the X ring. This becomes the 10 ring at indoor compound competitions. Outdoors, it serves as a tiebreaker with the archer scoring the most X’s winning. The number of hits may also be taken into account as another tiebreaker. In World Archery, targets are coloured as follows:

Archers score each end by summing the scores for their arrows. An arrow just touching a scoring boundary line, known as a Line Breaker or Line Cutter, is awarded the higher score. Values scored by each arrow are recorded on a score sheet and must be written in descending order (e.g. if an archer scores 5, 7, 6, 10, 9, 8, this must be recorded as 10, 9, 8, 7, 6, 5). During and before scoring no one is allowed to touch the arrows. This is so that if there is disputed arrow score then a judge may be called and the judge makes a ruling on how the arrow lies. The archer in charge of scoring on a target at a tournament is known as the ”Target Captain” and in larger tournaments, they may be assisted by a ”Target Lieutenant”; a Target Captain makes an initial judgment on all disputed arrows. Under WA rules, in major tournaments, after scoring, each hole is marked before arrows are retrieved. In the event of a “pass through” (the arrow passes straight through the target) or “bouncer” (arrow hits the target and bounces out), points may be awarded to an unmarked hole. Under AGB rules, and in some smaller tournaments, in the case of a bouncer, the archer must step off the shooting line and hold their bow in the air. A judge then decides whether the archer is permitted to shoot a replacement arrow. If an archer accidentally shoots more arrows than allowed, the highest scoring arrow is not counted and a miss is recorded.

Different rounds and distances use different size target faces. Common sizes (and example rounds they are used in) are:

122 cm faces are used in Olympic competition. A variant of the 80 cm face, called a “Spot” may be used when shooting WA rounds. This variant shows only the inner 6 rings of a full 80 cm face. There are also versions of the 40 cm and 60 cm targets known as the “3 Spot”. The targets contain 3 instances of the inner 5 rings of the 40 cm and 60 cm faces arranged in a line or an equilateral triangle. This is to stop competitors from damaging their own arrows by shooting a “robin hood”.

Imperial rounds (measured in yards) are mainly shot in the United Kingdom. Metric rounds, also known as WA rounds, measured in metres, are used for most other tournaments. These are the main rounds that are able to be shot in target archery:

How to use the tables

Go down the first column of the relevant table until you get to the round you require. Go across this row to find out how many arrows you shoot at each distance (yds=yards, m=metres, doz.=dozen). An – means no arrows are shot at this distance.

These rounds use 5-zone scoring, as opposed to the usual 10-zone scoring. The points are awarded as follows: 9 for a gold, 7 for a red, 5 for a blue, 3 for a black and 1 for a white. Arrows are shot at increasingly closer distances – for example, in a York round, an archer shoots six dozen at 100 yards (91 m), followed by four dozen at 80 yards (73 m), followed by two dozen at 60 yards (55 m). Senior rounds are for archers aged 18 and over and junior rounds are for archers under the age of 18.

Archery was in the Olympics (and the 1906 Intercalated Games) between 1900, the second modern Olympics, and 1920. The sport was dropped from the program because there were no internationally recognized rules for the sport- each Olympics through 1920 held a different type of event. With the creation of FITA in the 1930s, set international rules were created. However, it was not until 1972 that Archery was re-introduced with the individual event, and in 1988 the team event was added to the program. Further competition rules changes were made for the 1992 Olympic Games, which introduced match play to the program in the form of the Archery Olympic Round.

The only type of bow allowed to be used at Olympic level is the recurve bow. Since the 1984 Games at Los Angeles, South Korea has dominated the women’s event. At the Sydney 2000 games, the Korean women won bronze, silver and gold in the individual competition and won gold in the team event. They also won the gold team medal in the 2004 Athens games, the 2008 Beijing games, and the 2012 London games. However, recently India, China and Taipei have emerged as serious challengers to the domination of the Korean women.

We are here to make life EASIER for you.