What is Field Archery.

What is Field Archery.

Field archery involves shooting at targets of varying and often unmarked distance, typically in woodland and rough terrain. As well as being a sport in its own right, it can be used to improve the techniques and abilities required for bowhunting in a realistic outdoor setting. Archers sometimes refer to the additional skills required to deal with challenging terrain and lighting as “fieldcraft”.[1]

IFAA and NFAA[3] competitions include three rounds: field, hunter, and animal. A round consists of 28 targets in two units of 14.[4][5]

Field rounds are at ‘even’ distances up to 80 yards (although some of the shortest are measured in feet), using targets with a black inner ring, two white middle rings and two black outer rings. Four face sizes are used for the various distances. A score of five points is awarded for shots which hit the centre spot, four for the white inner ring, and three for the outer black ring.

Hunter rounds use ‘uneven’ distances up to 70 yards (64 m). Scoring is similar to a field round, the target has an all-black face with a white bullseye. Child and youth positions for these two rounds are closer, no more than 30 and 50 yards (46 m), respectively.

Animal rounds use life-size 2D animal targets with ‘uneven’ distances reminiscent of the hunter round. The rules and scoring are also significantly different. The archer begins at the first station of the target and shoots his first arrow. If it hits, he does not have to shoot again. If it misses, he advances to station two and shoots a second arrow, then to station three for a third if needed. Scoring areas are vital (20, 16, or 12) and nonvital (18, 14, or 10) with points awarded depending on which arrow scored first. Again, children and youth shoot from reduced range.

3D rounds use life-size models of game animals such as deer. It is most common to see unmarked distances in 3D archery, as the goal is to accurately recreate a hunting environment for competition, albeit a more loosely organized form of competition than other types of field archery. Though the goal is hunting practice, hunting tips (broadheads) are not used, as they would tear up the foam targets too much. Normal target or field tips, of the same weight as the intended broadhead, are used instead. 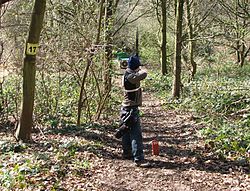 The information in this section is taken from Book 4 of the WA Constitution & Rules.[6]

The World Archery Federation, commonly known as WA and formerly as FITA (Fédération Internationale de Tir à l’Arc), defines a suite of rounds based on a 24-target course.

Four target face sizes are specified: 80 cm; 60 cm; 40 cm and 20 cm. Six target faces of each size are used on the course. For each target face size there are upper and lower distance limits for the various divisions of archer. Target faces have four black outer rings and a yellow spot, each with an equal width. The yellow spot is subdivided into two rings. The black rings score 1 point for the outermost to 4 points for the innermost. A hit in the outer yellow scores 5 points. A hit in the inner yellow scores 6 points. Before April 2008, the innermost yellow ring counted as an X (the number of Xs was used for tie-breaks) but only scored 5 points.

Shooting positions are marked by coloured pegs set at a distance from each target. Generally the red peg is set the furthest from the target, the blue peg is set nearer, and the yellow peg (or white peg in the UK) is set the nearest. The course layer may choose to vary this, though. Each peg is associated with one or more divisions of archer:

WA rules state that the lanes between the shooting positions and the targets must not be obstructed by branches or tree trunks.

Archers follow the course in groups of between two and four. The pegs are arranged so that two people can shoot from one peg at the same time. Each archer shoots three arrows at each target, making a round of 72 arrows.

In the United Kingdom, the NFAS (National Field Archery Society) sets the rules for many shoots, including Big Game and 3D shoots. Most of these consist of 36 or 40 targets or 2×20 targets. The NFAS is not affiliated to any international organisation.

The information in this section is taken from the NFAS Rules of Shooting.[7]

The most common NFAS rounds have a “walk-up” format, where the archer starts at the furthest peg from the target and proceeds to nearer pegs if necessary.

If the scoring area is not hit with the first arrow, the archer will proceed to the white peg for his/her second shot. A kill scores 14 points. A wound scores 10 points.

If a third shot is needed, the archer will proceed to the blue peg. A kill scores 8 points. A wound scores 4 points.

If all 3 arrows miss the scoring zones, the archer must stop shooting and a zero is scored for that target.

Cubs (under age 12) shoot all their arrows from the closest yellow peg.

All archers attending these shots must carry a valid NFAS card in order to shoot.

The information in this section is taken from the NFAS website, sections “About the NFAS” and “NFAS: The Rules.” [8]

As part of the Constitution of the National Field Archery Society, an annual championship shall be held, open to members.

The NFAS hold shoots throughout the year and all over the country. They currently (2017) hold two championships,[9] open to eligible members:

We are here to make life EASIER for you.